The SJ4000 Wifi Edition has arrived in the USA market! 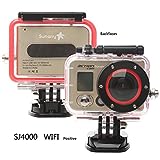 WoW. For that much I would buy a GoPro, that is if I had the money

Thanks for the info.

Here is a U-Tube video of a potential problem.

When you first plug it in, the big green battery that displays on the LCD is just a still image built-in to the camera's firmware. Some people are changing that image to something else (like their name and phone number in case the camera is lost/stolen). The blinking battery icon in the upper right hand corner of the LCD just means that it's charging. It won't show a battery meter level until you unplug it. The only light or indicator that you should pay attention to on this camera for battery charging is the red LED on the left side of the screen. When you have the charger plugged in and the camera turned off, if the red LED is lit, it's charging. When the red LED turns off, it's fully charged.

I finally received my dashcam suction cup mount/car charger as well as the battery charge cradle from Foxoffer.com. Took quite a bit longer than I'm used to for shipping from Singapore. It usually only takes a week. The cradle is just the cradle -- you use the AC adapter and USB cable included with the camera for charging. You can also use the car charger to charge the battery, which could be handy. Again, just about any non-Apple phone charger is going to charge the battery via this cradle or in the camera, so you don't have to bring 50 different power adapters with you on a trip. The charging cradle has the same blue and red LED status lights on it as the camera. I purchased two additional batteries for this camera, so the cradle is a nice accessory to have so I don't have to swap out the batteries in the camera just to charge them. One caveat to switching between three different batteries is that the camera loses its date/time setting every time, but what's weird is that none of the custom settings are lost.

I'll post some pics of the accessories later, and also a review of using this as dashcam. The dashcam feature can actually be fishing related, as some of you have a 12v power in your kayaks, so you could just use this camera as an always-on fishing camera. When in the dashcam mode, the camera breaks the videos apart into smaller files, and when the SD card is full, it cycles the card (deletes the oldest file). A 32gb SD card can hold quite a bit of video (like 4-6 hours at 1080p/30fps), so if you captured any footage you want to keep early in your day, you might want to switch out the storage card at the 4 hour mark to be safe.
-- Chris

By the way, I see this time you went with my same color of camera...

Thanks for the great info on the PINK camera that doesn't work.

Didn't know that about the lights etc.

Yep that Pink camera is going back once more.
I had it charging all night and it will not charge.
Received it at noon yesterday and put it on charge. Woke up this morning and you can see the time stamp in the pic.
Battery not fully charging so I took it off charge.
I'm done.
Last edited by Rollbar on Sun Jul 06, 2014 5:20 pm, edited 1 time in total.
Ascend FS128T "The Yacht"

internetpilot wrote:By the way, I see this time you went with my same color of camera...

Maybe GoPro has a PINK one that will work !

I replied to the vendor requesting total reimbursement of funds-so we will see if they offer any excuse.

Thanks again for all the help,
Jim
Ascend FS128T "The Yacht"

Found this write up.


I just went through this same process. I ended up getting the VIRB Elite. I chose the Virb Elite over the GoPro because of the integrated viewfinder, better battery life, and integrated gps. The cool thing about the integrated gps is it allows you to overlay all sorts of tellemetic data on your video. It also connects via ant+ to heart rate monitors, temp sensors, bike speed/cadence sensors. I have all those for my bicycles so it integrates well for that too.

As far as performance, all the side by sides I have seen show similar quality. The gopro has more video mode options as far as frame rate and resolution. The new gopro will do higher res than the virb. The virb though has a dedicated slo mo mode and also time lapse which is pretty fun to play with.

One hesitation for me was the abundance of accessories for the gopro over the virb. This has not been an issue, because the virb comes with a gopro compatible mount.

Lastly, something to consider for kayaking....waterproof ness. The gopro comes with a waterproof case as it always has. The virb by itself is splash proof/waterproof for limited time at shallow depths. I don't remember the exact statistic. You can get a dive case for the virb though.

One more thing I just remembered....the virb has a very easy to manipulate record switch. Even when the camera is off, just slide the very large switch forward and you know you are recording. No more staring at the front of a gopro wondering if it's recording.

Sorry you're having such problems with yours. Don't know if it's dumb luck or just a matter of time for me, but I've used mine on two fishing trips and two family vacationswith zero problems so far, whether using the original battery and charger or using the two additional batteries and my phone charger. They've all worked equally well.

Did you upgrade your firmware? That might be the difference if you didn't, because the cameras ship with the original factory firmware, and there have been 4-5 new updates (depending on whether you have a v1.0 or v2.0 camera) released. I have a v1.0 camera so my firmware is dated 3/29/2014.
-- Chris

I'll look and try to find out the firmware/1.0 etc.

P.S. what do you think about this camera?

And, it comes in PINK

Thanks,
Jim
Ascend FS128T "The Yacht"