Who caught what, when, where, and how.

Did you guys empty Guana of all its fish? I just paddled there for the first time today. I worked a fairly large area around the Six Mile ramp and a bit south. I trolled a soft paddle tail jig suspended from a poppin' cork, all the while casting a white Redfish Magic spinner bait. I never even got a nibble. I saw tons of small mullet everywhere and a few schools got scattered by something or other. There were a few other yakers out there too. It's a beautiful place and I'll definitely try it again. I didn't expect it to be so shallow though. My paddle hit bottom unintentionally in most places. Have you guys been catching there latey?
Top

Hearing you say that makes me want to wait till they raise the water level again. I believe someone stated they drained the lake a bit a few months ago for cleaning or something like that. What I have really noticed is that I need a good 6-12" more depth to get around comfortably in the PA12 versus my Tarpon100.
| Sua Sponte |

I was out there last week. I launched @ 6 Mile and headed North two days in a row. I also had my kids and rented another yak at North Guana and headed from North to South. Plenty of shallow spots, but nothing that left me stranded. There was a flat that was holding a lot of reds. There were hiding in thick vegetation, but the clarity of the water was great in that area. I worked my fly rod, but the wind killed me. If I had some bait and my regular rod, I would have had a great day.
Top

I was there yesterday also, and fished for 3 hours from just before sunrise with my buddy. Not even a bite. Like you said tons of bait and mullet jumping. I saw at least one trout hit some bait, but nothing was biting top water or soft plastics. I'm wondering where all the fish went. Last year at this time was much better in my opinion...
Tight Lines!
Top

Guana is defiantly a fickle place, ill start fishing there in the spring after the draw down and the fishing is insane all summer. In the fall the season end seems to coincide with the end of the mullet run. Ill go from catching slot and over slot reds and trout all day to nothing at all within a couple weeks span. I've never tried fishing it in the dead of winter because it seems like there is better options.
Top

New to the area and fished there ( 2 miles north of dam) and Wed. Not a nibble either day on artificials caught some nice trout and smaller reds in late afternoon on shrimp and cut mullet. Of couse if someone finds an old iphone in a nonfloating case.....
Jackson Big Tuna, Slow speed high drag...
Solo Skiff, old man yaking at its best

I have seen plenty of big fish North, reds and a few Gar. I have been focusing on fly fishing however and haven't perfected it from the yak yet, so no luck.
Top

SuaSponte wrote:Hearing you say that makes me want to wait till they raise the water level again. I believe someone stated they drained the lake a bit a few months ago for cleaning or something like that.

Have no fear, the water level in Guana is "up" right now.

Starting Wednesday, you'll have to launch from the dam until February. Be cognizant of upcoming waterfowl hunting, I wouldn't go north of the sign on hunting days (someone chime in, but is it Wed & Sat?)

I heard the fish were biting just fine Friday, maybe no luck today was due to the noreaster/front?
Top

The trout bite was good this afternoon. Fished during the rain between noon and 3.

I kept moving and concentrated on fishing the areas where i found bait (smaller mullet and shrimp).

Caught a few of these. 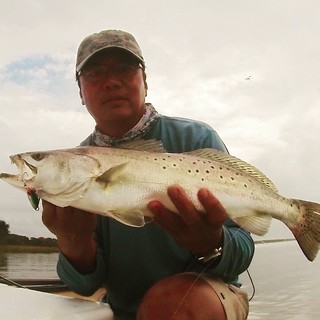 I had a bad summer there this year, my excuse is there was too much rain...
Top

Thanks for the input. Glad to know its not just me with lackluster results. I'll definitely go back but might wait until spring. I live on the south end of Saint Augustine so it's a bit of a drive.
Top

Launched at 6 Mile at sun up. Floated around (north of ramp) and not a bite. Hour later, loaded up and launched at Guana Dam (north) and got huge flounder on a top water, slot red and a croaker on shrimp. Never liked 6 Mile but I was outvoted by my group. Glad we went to Guana and brought home dinner.
Top

Useeverycolor wrote:Did you guys empty Guana of all its fish? I just paddled there for the first time today.

Feel like I have to stick up for six mile. I've been catching and releasing from North Guana Outpost to the dam all spring, summer and fall, despite the rain and wind. Six mile isn't empty, its just not as easy to catch fish there this time of year. Fish have seen a lot of presentations by the fall and that makes using arti's even more challenging. Not too mention these are life-timer fish, they get educated over time. I'm sorry you guys missed them, but they were there. I was in the six mile area the night this post was made and boarded several slots with my parents in just a couple hours of fishing. Simple paddle tail on a jig. It was their first time out with me on the SUP and yak.

You've certainly got the fish dialed in there.

ChippMatt wrote:I've been catching and releasing from North Guana Outpost to the dam all spring, summer and fall, despite the rain and wind...I was in the six mile area the night this post was made and boarded several slots...in just a couple hours of fishing. Simple paddle tail on a jig.

every time I read on any forum when a "for hire" guide feels the need to post and rub the noses of inquiring beginners, novices, others etc. in the "for hire" guides' success.
Banned for being an asocial jerk.
Top
Post Reply
21 posts